Earth’s Moon possesses a clear dichotomy between its nearside and farside hemisphere. This asymmetry is both compositional and structural. The most important features are the volcanic activity and radioactive heat sources concentration on the nearside. Though the case for the causal relationship between the two has been made, the origin of the concentration of radiogenic elements is still unclear, despite numerous studies. The main hypotheses include impact driven processes, asymmetrical crystallization of the early lunar magma ocean and degree-1 Rayleigh-Taylor instabilities in the crystallized magma ocean.

Recent analysis of the Japanese lunar orbiter Kaguya (SELENE) spectral profiler showed that there is a significant difference in magnesium content relative to iron between the two hemispheres. Iron is more incompatible than magnesium therefore a higher magnesium number implies crystallization from a less evolved magma ocean. This observation strongly favors an asymmetric crystallization of the magma ocean as the cause for the present day observations. It is therefore necessary now to re-investigate processes leading to asymmetric crystallization, and their consequences on long term evolution.

The following figure from Ohtake et al. (2012) shows the near and farside Mg# distribution. 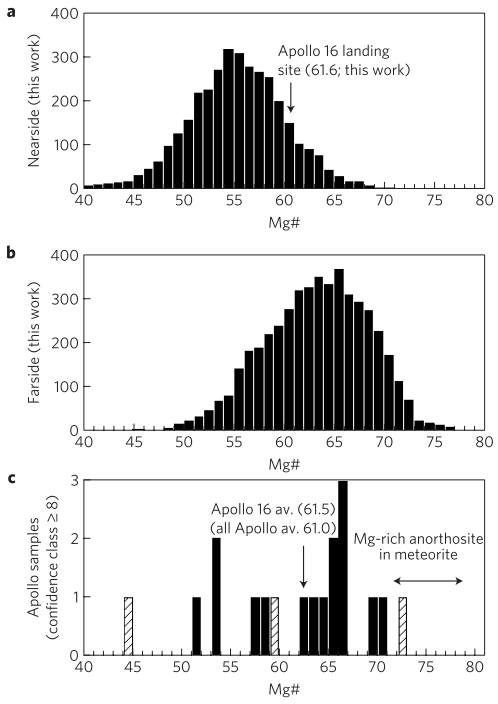